This summer will mark eleven years since I visited Israel. Israel, specifically, the city of Jerusalem is crowded—physically, but also historically. It is the bull’s eye for three of the world’s major religions, saturated with meaning, purpose and haunted by ghosts.

The Old City itself is a mere forty acres big. Forty acres. Within walking distance are the places and landmarks Scripture has immortalized. They are packed so close to each other they seem less fairy-tale like, and more normal, nearly sacrilegious in their commonality. So much is packed in this tiny corner of real estate the land is practically buzzing.

When I think about Good Friday and Easter Sunday, I get the same feeling I got in Jerusalem. It’s crowded—the land, but also the days. How does so much despair, pain, loss and hurt fit in a day so close to another day filled with surprise, hope, expectation, and consolation? How do such big and conflicting feelings live so close by—in forty acres, and three days?

I suspect the distance spanning Good Friday and Easter Sunday is like life.  It feels like the hurt and pain should be neatly compartmentalized and kept separate from the other. And it feels like the excessive celebration of Easter should not bump too closely to the despair of Friday.

But life isn’t like that. At least I don’t think it is. I think God had Friday and Sunday rub elbows, begin to bleed together in the holy Saturday between them, because He knew, life is rarely all one thing with no taste of the other.

God knew hope for Sunday needs a place to live. And Friday is as good a place as any. Maybe the best. He knew the Sundays in our life are only as sweet as the Fridays we’ve lived to talk about. He knew despair was real. Which makes the miracle of resurrection all the more necessary. And He knew there could be no resurrection without a death first.

Life gets crowded. Crowded with the emotion of good and bad, with hurt and healing. And life is learning to get comfortable with a faith that lives easily in both. I suppose that’s some of the best news of Easter week. Not just that we have a Sunday to celebrate a God who lives, but that we have a Friday where God was comfortable staying for awhile, touching and tasting death. Easter, as much as any other time is a reminder of a God who doesn’t fit the mold. He’s not all one thing and none of the other. He’s both, and. He’s acquainted with grief. And yet, He throws as good a party as anyone.

That’s what Easter is to me. A reminder of God’s presence in the crowded space of our emotions. It’s in the nonsensical blending of hope and despair, of pain and restoration, of shame and grace, that God lives. And He’s comfortable marrying the two. Life is rarely all Fridays. And we need only observe current events to know it’s not all Sundays. But the good news is, we know a God who’s present in both. He’s not threatened by death but He’s also not ignorant of it. And on every other day that isn’t Easter Sunday, that’s good news. 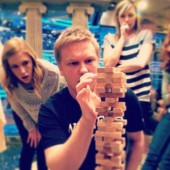 Why I (kinda) Get Judas

Power Play: What You Can Do Inauguration Day

Politics Aside: Addressing the Dignity of Women

Hi! I’m Sarah, wife to Rodney, mom to Asher and Pace, and writer—although I’m still trying to figure out how to do all three of those things. Sometimes I like books more than people, and all of the time I like French fries more than salad. I live in Georgia but I dream of the mountains.

You have Successfully Subscribed!

Designed by Simple Web | A Division of Stuff You Can Use